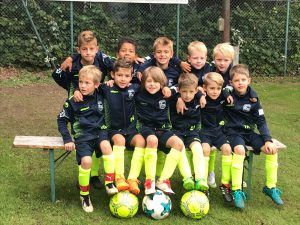 The club Freie Turnerschaft München-Gern (FT Gern) arose through the merger of three worker gymnastic clubs. In the beginning of the 30s, the football department of the club reached the final round of the ATSB (worker gymnastics sports federation) championship. The team F-Youth (F2) is currently one of the best teams of the birth year 2011 in Bavaria. ARTEMIS FTA supports the team’s athletic success with a donation and made the purchase of new athletic competition clothing, training suits, training tricots as well as footballs possible. The picture to the left shows the young FT Gern team in their new outfit together with their coaches Ippokratis Tsinoglou and Jochen Lutz.